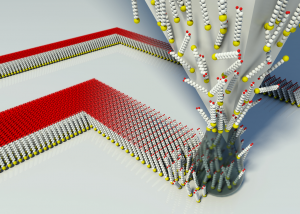 A single-molecule experiment is an experiment that investigates the properties of individual molecules. Single-molecule studies may be contrasted with measurements on an ensemble or bulk collection of molecules, where the individual behavior of molecules cannot be distinguished, and only average characteristics can be measured. Since many measurement techniques in biology, chemistry and physics are not sensitive enough to observe single molecules, single-molecule fluorescence techniques (that have emerged since the 90s for probing various processes on the level of individual molecules) caused a lot of excitement, since these supplied many new details on the measured processes that were not accessible in the past. Indeed, since the 90s, many techniques for probing individual molecules were developed.[2]

The first single-molecule experiments were patch clamp experiments performed in the 70s, but these were limited to studying ion channels. Today, systems investigated using single-molecule techniques include the movement of myosin on actin filaments in muscle tissue and the spectroscopic details of individual local environments in solids. Biological polymers’ conformations have been measured using atomic force microscopy (AFM). Using force spectroscopy, single molecules (or pairs of interacting molecules), usually polymers, can be mechanically stretched and their elastic response recorded in real time.